The top 100 photos of all time

By Visual Culture Blog, Items of Interest, Production Aug 29, 2017 Comments Off on The top 100 photos of all time

Imagery and photographs have long been a part of our nature as humans. Before the advent of the digital camera they served as a printed representation of our memory, a landmark in time.

For decades the world was transported to trouble spots, or emerging areas of elation and major sporting events through beautifully shot photographs and videos. Whether the photos you cherish are hung on your walls and tell of times spent with family and friends, or rather they are images from the past, an event that you weren’t at but have seen a photo that took you there, there is little doubt they are intrinsic to our nature.

These days a whole more people have the ability to take a snap shot or roll out a quick video, but before the selfie age when photographs were taken on film, some of the best shots in history were created. Their relevance to who we are is is very valid.

The very talented and influential folks at Time magazine have taken on the onerous task of assembling the 100 most influential images of all time. Looking through the list in was very difficult to remain unmoved. The images traverse the topics of war, religion, race and achievement. And the emotions scrolling through them are almost as varied.

I have chosen a few of my favourites, but click here to check it out for yourself. 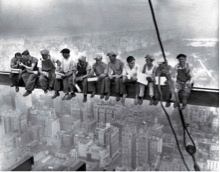 This shot is by an unknown photographer from way back in 1932.

The hardness of the work reflects in the faces of the men as they stop for lunch, perched high above the rapidly growing Manhattan street scape, quick somebody call the OH and S team. 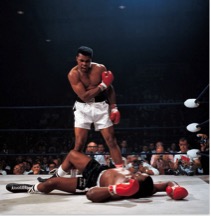 The Greatest. From the lens of Neil Leifer from Sports Illustrated, this image is the personification of illustrated sport.

It was Ali versus Liston. And just one minute, forty-four seconds into the first round Muhammad struck, and struck hard. 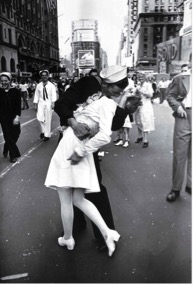 The year was 1945 and the photographer on the spot was Alfred Eisenstaedt. It was August 14th and the World War II had ended. A sailor grabs hold of a nurse and they share the joy and the promise of the moment. This image went onto become the most famous and reproduced photograph of the twentieth century.

And as we wonder into a world of more and more imagery, I think this shot speaks for our future. The photographer is Bradley Cooper on equipment supplied by Ellen DeGeneres at the Academy Awards in 2014.

Ellen then tweeted it immediately, the history was made when it then got retweeted a staggering 3 million times.

This is the future and it has already started.

…because we all live in a visual culture.