The Visual Culture Christmas short film – behind the scenes

Inspired by the UK Christmas ads from major department stores, I thought it was time we put together our own Christmas film for Visual Culture. If you haven’t seen it, you can view it here.

The idea of the storyline came about three years ago in fact, I jotted down a few ideas and each year around November I considered whether it was time to produce the film. I’d always come up with excuses as to why we shouldn’t do it –too busy with other projects, budgets and the logistics of it all. But this year, we were determined to do it! Essentially, we needed to treat ourselves as the client.

PRE-PRODUCTION
The first step was to pull out the old concept document to see if it was at a workable stage – in fact, the initial idea was sent via an email to one of my colleagues. It formed a good shell of a story, but now it was time to flesh out the detail and check to see if the story worked.

Developing the script came quite quickly – essentially listing all the scenes, what was due to occur in each scene and then writing a shot list for every camera angle.

My idea was to have the film with no dialogue, let the body language, facial expressions and music tell the story. In some ways this made scripting a little easier as we didn’t need to focus on dialogue – it would also save time in filming not requiring multiple takes or a sound recordist.

Once the script was complete, it was time to work out the filming schedule. So we took each of the 10 scenes and worked out the best order to film. Initially I had grand ideas of filming in a local shopping strip, post office and other places, but due to time and filming schedule, it needed to be simplified. Could we find one location to film most of the content? To do this, some aspects of the script needed to be changed, a time for us to get a bit creative with concepts.

The majority of the film would be shot in a house, which also added some complexity. We needed to source a house that would suit our main characters personality, but also have separate rooms that could be used to look like a different house for the young girls and then another room that could be used for the family from London.

So finding a filming location was going to be tricky, particularly when you have a very visual idea in your head of how everything should look – you almost need to write the script and shot list with the location in mind to see if it will all work.

For past client projects, we have had to source other houses for filming – and our first port of call now is accommodation sites like Air BnB. We find a few houses that match what we are after, contact the agent and be completely upfront in what we are hoping to achieve and see if they approve. For this project, we contacted a Mornington Accommodation website and we found the perfect place 5 minutes away from our production studio in Mount Eliza, right on the cliff top looking out over Port Phillip Bay. It wasn’t a modern house but it had a lot of character that would work perfectly as our old mans home. In the film, it’s clear that he has lost his beloved wife, hopefully the viewer can visualize the two sharing that house together in the past.

We then needed to find an outdoor location that we could use for the post box scene (this was originally a post office scene). I found the perfect spot within 3 minutes drive – but no post box. So we needed to get creative with superimposing our own post box in post production – you would never know it wasn’t real.

Next up it was casting – we had booked our accommodation within a very short timeframe and we only had a few precious days for casting. There were a number of roles to fill, so we posted our ad online to see the reaction and we received a high number of quality applicants – from there we selected our actors. There were a few late cancellations, but luckily we filled the roles at the last minute.

So we had our script, our location, our actors and the crew booked in. All of this was done in about a week – so much to pull together and co-ordinate in a short amount of time – once we locked in that date and said yes we are doing this, it all came together efficiently. Years of co-ordinating client projects made the whole process seamless. 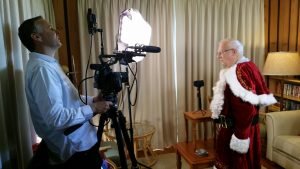 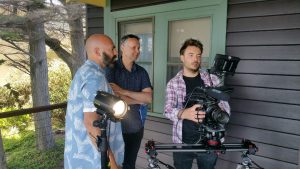 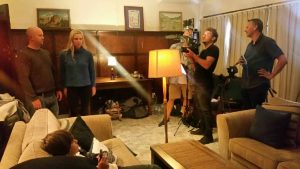 FILMING
Due to the amount of scenes and shots to film (around 100) we decided to split filming over one and a half days – after all, our minimum booking for the house was two nights so why not get our money’s worth. So on day one, we knocked off all the scenes where our main character was on his own. Day two, we co-ordinated different schedules for the remaining actors.

It was such a great bunch of people to work with – yes, we were flying through filming and schedule, but everyone had a great time. Our schedule was set to half hour blocks so we knew exactly where we needed to be at which time with relevant actors. The filming days ran very close to schedule.

And as is the case with many of these types of projects, everyone shared ideas to help make certain scenes just that much better – having a collaborative team on set is brilliant and always great to bounce ideas around.

One scene in particular required us to film a family photograph. We quickly set up a birthday cake, took a few happy snaps and then rushed to the studio to print out the photo, put it in the frame and then rush back to film the scene. Many hands make light work.

The day of filming finished with a scene overlooking the magnificent bay views – the sun was setting at the right time, sky a perfect blue – we actually had this perfect Melbourne weather on both days, which we were very grateful for.

It was a bit warm outdoors, I feel for Andrew having to dance around in that Santa suit in the heat. Had to make the filming of those scenes very quick. But the house was oddly cold – so in between takes some of team rugged up in jumpers, even jumped under blankets to keep warm.

All in all, very pleased with the filming and schedules, everyone played their part well. 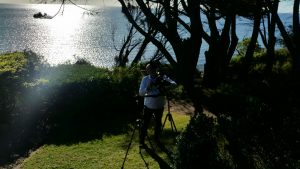 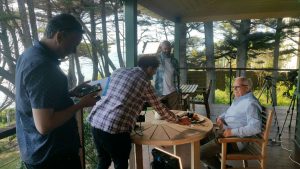 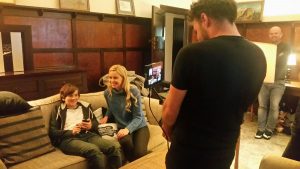 POST PRODUCTION
At the time of filming, I was also involved in preparation for a major project for one of our clients – I was actually due to head overseas the following week. So post production was put on hold until after I got back. It was actually a nice little project for me to get back to after filming overseas – the jetlag had a delayed hit, so the short film edit was a good distraction.

The editing process was really straightforward, again due to having such a comprehensive and detailed shot list. We focused on each scene individually and then brought it all together as one long sequence. Unfortunately the first edit was well over 8 minutes, so it was time to trim. Next version still too long at over 6 minutes. I was almost ready to sign off on that version, but had a change of heart and culled another 2 minutes out, which meant some scenes needed to be deleted. But the finished product works much better.

After showing a few people the first cut, we realized that the story wasn’t quite working in some areas. In particular, it was unclear that his family was from London or that it was the phone that he needed to send, not his wife’s photo. So I quickly called up our main actor Andrew to check his availability for a quick reshoot of some scenes. The day just happened to be sunny, closely matching the other scenes, but the forecast for the next few days was rainy – for an entire week. Luckily we organized it all within an hour, added our new scenes to the edit and the story flowed much better.

I also needed to add in some animated graphics for the news story and social media scenes. In addition, source overseas stock footage to superimpose dancing Santa. But one of the biggest challenges was finding stock footage of people dancing – in particular, finding footage that mimicked Santa’s dancing with hands in the air. But surprisingly, this was fairly easy to find as well.

To tie it all together, the music needed to be both Christmassy and engaging to best reflect the emotions of the story. I didn’t want to have the same track the whole way through and again, found a number of great tracks that worked well with the scenes. The last scene needed to have a music track that was quite emotive, with both high and low points.

DISTRIBUTION
We posted the video to our Facebook page and instantly it drew a high number of views organically. We then decided to throw some sponsorship dollars behind it and within a few days, the views have reached over 2k. We also distributed to our network via a newsletter with lot’s of nice comments coming back. If we could at least put a smile on peoples faces (even if they thought the video was a bit cheesy) then our job was done. We hope it makes people feel good and get into the festive spirit, just like those department store ads do.

I want to thank the great team behind this video once again – so much to do in such a short amount of time. But it’s also the perfect example for us to prove to clients at what can be achieved in a short amount of time. If you have a creative idea that you think might not be achievable due to time or budget restrictions, speak to us and we can help you work through the process and work out a way to make it possible.

Because we all live in a Visual Culture….