The unsung heroes of the Olympics

By Visual Culture Blog, Items of Interest, Tips & Techniques Aug 29, 2017 Comments Off on The unsung heroes of the Olympics

So another Olympic Games draws to a close and again we were treated to some truly magical moments.

The Games were the most viewed in Olympic history, thanks in part to the easy access of online streaming from all our devices. I’ve always been a huge fan of the Olympics, ever since the days back in primary school where we would hold mini-olympics and come home with our own medals cut out from card board and foil. And this year was even more special as my two sons, 4 and 2, witnessed the magic of the games for the first time, cheering on athletes from all sports and running around the house when Australia won a medal.

Personally, I was really disappointed with the media coverage constantly focusing on the negatives of the games. But rather than rant about that aspect, I thought I’d write a blog about the unsung heroes, the ones that brought the Games to our screens. The people that made you stop and think, “How did they do that?”, “I’ve never seen anything like it!” “Those reflexes are extraordinary!” That’s right, the production teams behind the scenes bringing us all those glorious images and footage. Pushing the boundaries to capture every sport from unique and exciting angles to make the viewer feel as though they were right there. So I thought I’d write about our Top 5 best moments from a visual point of view. 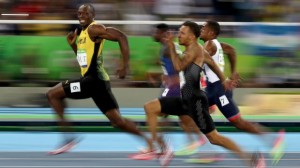 There is one moment that will sum up these games and has already been labeled as one of the greatest sports photos of all time. Taken by Australian photographer Cameron Spencer, it shows Usain Bolt giving his trademark grin as he streaks ahead in the semi finals of the 100 metres. It’s one of those images that perfectly captures an atheletes personality and domination of the sport. This photo will be showcased for many years to come.

It seemed as though spider-cam was every where at these games including the opening ceremony, basketball, soccer, BMX etc. Yes there was one mishap when one of the cameras fell from the sky, but thankfully no one was seriously injured. We all know the incredible footage that is captured by drone cameras, but with so many crowds around at Olympic events, it was impossible (and highly illegal) to have drones buzzing around certain events. So the spider-cam setup was erected to give the viewer a birds eye view of the action. Who could ever forget the camera tracking with the runners around the bend into the straight.

Watching the recap of the games highlights on the final night is a highlight for me (it’s the editor in me that loves to be inspired creatively). It’s here we get to see the best of the best – not just the sports, but the very best visuals. Many of those shots featured incredible slow motion footage, it adds an even more dramatic element.

It’s not just the athletes that need to be at the top of their game and mentally switched on – it’s the people behind the cameras, with reflexes needing to be super sharp. We all felt the butterflies in our stomach as the German and Brazilian teams lined up for the penalty shoot out, wondering which way the goal keeper would dive to make the crucial save. But imagine the pressure on the cameraman who had the responsibility of capturing the close up of the goalkeeper and also having to guess which way he would dive. There is a split second to make a decision, and of course the footage of the Brazilian keeper making the final save was framed perfectly – a big applause not only the great save, but also the great filming.
(scroll all the way to 7.10)

There is one piece of footage that blew me away at the games. I’m one of those people that always dissects movies and TV shows to understand how they captured footage, set up scenes etc (much to the annoyance of others watching with me). But I did scratch my head wondering how did they do that? It was of the Brazilian gold medallist pole vaulter and the footage captured his run up, pivot on the pole, then followed him as he cleared the bar and finally his reaction to winning – all in slow motion. After further research, I saw a small crew next to the mat using a jib arm, following the action of the jump – talk about only getting one chance to get the shot. We also saw the tracking shot used to great effect in other sports – underwater at the swimming, following the divers into the pool and alongside runners in the athletics.
(from 0.50 secs)

So there you have it, a quick summary of some of the great work the broadcasters have implemented and we can only guess what incredible camera angles and ideas will be introduced at Tokyo 2020.

And to finish off, one of the great sports television commercials from UK broadcaster Channel 4 promoting the Paralympic Games in Rio.